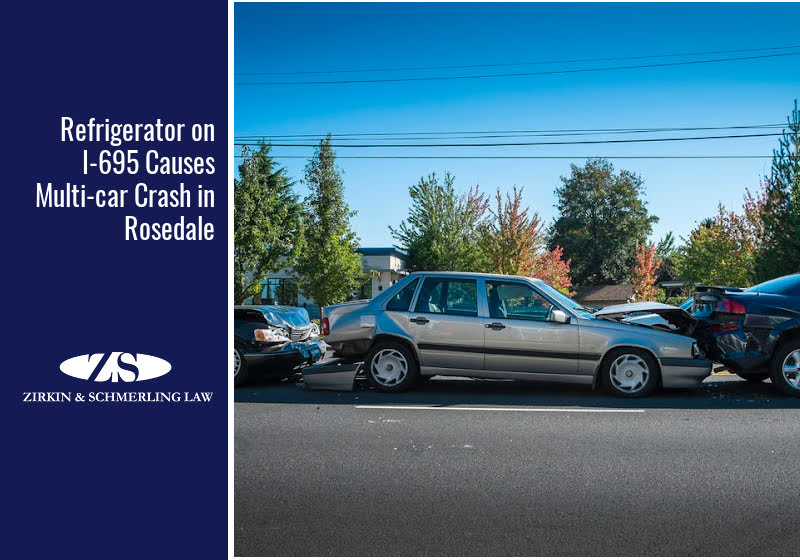 Interstate 695 is an incredibly dangerous place to drive in Baltimore. This year, a serious multi-car crash occurred on I-695 in Rosedale that involved over five vehicles, one of which was an ambulance. The wreck occurred on August 2, 2021, and the main source of the wreck was an obstruction on the road.

If you drive in Maryland, you need to be aware of how police determine liability and what you should do if you experience a multi-car traffic accident.

At around 4 P.M. near exit 35 on I-695, multiple wrecks occurred as a result of a refrigerator obstructing the interstate. Authorities haven’t been able to track down the vehicle that was carrying the refrigerator. The obstruction was in the middle of I-695 and slowed down traffic, but some vehicles were unable to avoid the road hazard.

One driver wrecked into another car because they quickly switched lanes in an effort to avoid a collision with the refrigerator. Additionally, one vehicle was rear-ended, and two other vehicles suffered damage as a result of the chaos. An ambulance was hit by a swerving driver who was attempting to avoid the multi-car crash. Finally, a vehicle received substantial damage from the side which resulted in the driver sustaining bodily injuries.

Although many drivers were involved in the multi-car wreck, none of them received traffic violations.

The unfortunate occurrence on I-695 serves as a reminder that multi-car crashes are often incredibly complex. Insurance claims are more difficult when several cars are involved because determining who was at fault can be challenging and multiple parties are often to blame.

It’s critical to avoid being partially responsible in a multi-car wreck because Maryland is a contributory negligence state. Most states abide by comparative negligence policies, which means drivers are given a percentage of responsibility based on their role in the traffic accident. For example, one driver may be found to be 85% responsible for a wreck because they were texting while another vehicle may be found 15% at fault because they were speeding. The amount of compensation one could recover from the opposite party’s insurance company depends on their percentage of fault. With Maryland’s contributory negligence policy, this is not the case. If you’re found to be partially at fault for a traffic accident, you cannot recover damages from the insurance company of the other driver, even if your percentage of fault is negligible.

What Should I Do if I’m Involved in a Multi-Car Wreck?

If you’re injured in a multi-car wreck or a chain reaction wreck, you should seek medical attention immediately. After calling an ambulance, you should then contact the police.

One vitally important thing you need to remember in the event that you experience a multi-car wreck or a traditional car accident is that you should not admit fault at the scene. The wreck could have been caused by multiple factors, but if you apologize or admit fault, the blame could be entirely placed on you. When the police arrive, answer their questions truthfully, but say as little as possible. Don’t overelaborate on your answers because that could result in you receiving more blame for the wreck than you deserve.

After experiencing a multi-car wreck, you should also obtain evidence if it’s safe to do so. If you’re physically unable to obtain evidence, try to get a passenger or bystander to do it. You can take pictures and record videos from your smartphone of the scene of the accident. Additionally, you should write down factors that may have contributed to the wreck, such as a storm or an impediment on the road. You should also attempt to sketch an overview of the scene that includes the vehicles’ positions as well as any other relevant information. Documenting the wreck and collecting evidence is important because you may forget details of the incident. With evidence, pictures, and videos, you’ll have an easier time remembering what occurred, which will help you with your claim.

When you initiate the process of filing a claim, make sure to work with a car accident lawyer to help you submit relevant medical reports, police reports, and any additional evidence you may have collected at the scene.

Multi-car accidents and chain reaction wrecks are often difficult to navigate. Those involved in these wrecks can often become involved in multiple lawsuits because several parties can be at fault. Experienced car accident lawyers can guide you through the confusing process, and they can help you prove others’ negligence. If you experience a car accident, contact Zirkin & Schmerling Law. We’ve helped numerous clients get the money they deserved from car accidents, and we can help you through the entire legal process. Call our office at 410-753-4611 or click here to schedule a free case consultation.