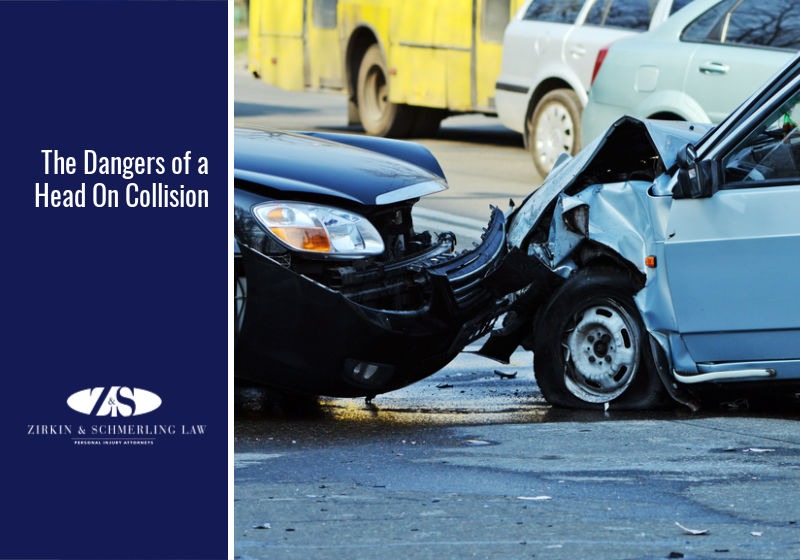 Of all the impact types, including rear-end, sideswipes, and t-bones, head on collisions are almost always the worst and most dangerous.

Our law firm sees numerous Maryland head on collision accident cases every year. We understand how devastating these accidents can be and are dedicated to helping our clients get the help they need to pay for their accident-related expenses.

So, what is it exactly that makes a head on collision so dangerous? Let’s take a look.

Why Are Head On Collisions So Dangerous?

A head on collision occurs when the fronts or “heads” of two cars collide or when the front of one car crashes into another object, such as a traffic barrier, a tree, a building, etc. What makes these kinds of accidents so much worse than others is the force of impact and the resulting debris.

When two cars collide head on or when one car runs into another object, there is extreme force placed on the front of the vehicle, which often causes the front of the car to crumple. That force also travels through the car and can cause the body of the passengers, especially those in the front seats, to jerk or whip back and forth violently.

When the front of the vehicle crumples, it often results in debris flying around, such as shrapnel and glass, which can cause further injury to the passengers inside. If the impact occurred at high speeds, a head on collision could result in the passengers being thrown from the vehicle, usually if they weren’t wearing a seatbelt. Or, if the damage and crumpling of the car are severe, it could end up crushing the passengers in the front seat.

Leading Cause of a Head On Collision

There are many ways that a head on collision can occur. Some of the leading causes include:

No matter the situation, head on collisions are almost always the cause of driver error. This can include one or more than one driver acting negligently, such as speeding or using their phone while driving.

Most Common Head On Collision Injuries

Head on collisions often result in severe, life-threatening injuries, which is another reason why they are considered so much worse than other kinds of accidents. Even if you are wearing a seatbelt, you can still sustain a number of serious injuries that could result in complications or death.

Passengers in the front seat are especially prone to severe injuries in a head on collision because they are closer to the point of impact and can be crushed by parts of the car when it crumples or may be hit by broken glass or shrapnel. They can also hit their heads or bodies against the dashboard, which can cause blunt-force trauma injuries.

Some of the most common head on collision injuries include:

Determining Fault for a Head On Collision

When you are injured in a head on collision, a personal injury claim can help you recover compensation for damages such as medical expenses, lost wages, and pain & suffering. However, in order to file a claim or a lawsuit against another party, you must be able to prove that they were at fault for the accident.

Maryland is a contributory negligence state, so if you are even 1% at fault for the accident yourself, you will be barred from recovering compensation. So, again, you will need to be able to prove that another party was entirely at fault for what happened.

Unfortunately, this can be challenging with head on collisions that involve two cars. As both cars seemingly ran into one another, it can be difficult to determine who was initially the one responsible. For this reason, it is often necessary to work with a head on collision lawyer.

A lawyer can help you gather evidence to prove what happened and protect your rights. The other party and their insurance company may try to do whatever they can to deny fault, but if you have a lawyer defending you and providing sufficient evidence to show what happened, you are more likely to win and get the compensation you need and deserve.

Have a Legal Question? Our Head On Collision Lawyers Have Answers.

The aftermath of a head on collision can be traumatizing, stressful, and even tragic if the injuries are severe. Our compassionate team of Maryland car accident attorneys here at Zirkin & Schmerling is here to help.

We can handle your case for you while you focus on getting the medical care you need. We know what it takes to protect our clients and ensure they are awarded the high-value settlement they need and deserve to compensate them for their losses.

Contact us or call us at 410-753-4611 to set up an appointment with one of our head on collision lawyers today.