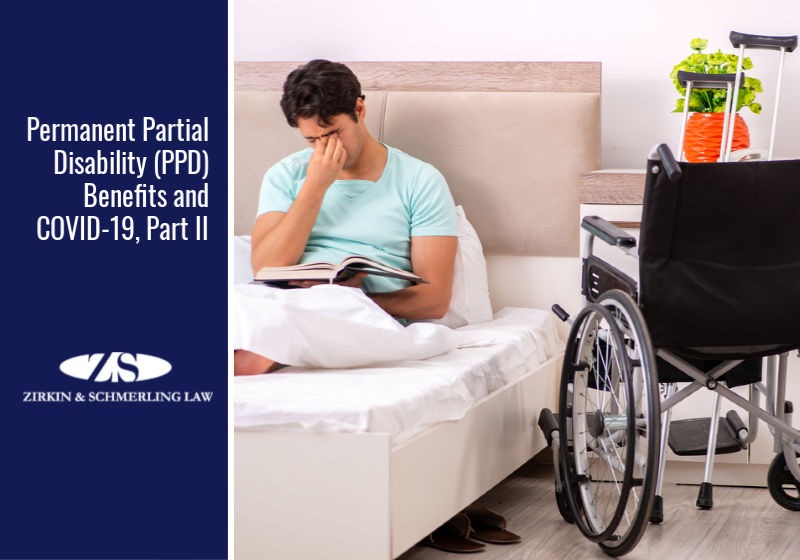 Let’s say that an injured worker (Izzy) suffers lung fibrosis as a result of work-related COVID 19.  The lungs are considered part of the “body” for PPD purposes.  An injury to the body allows someone to receive a maximum of up to 500 weeks of PPD payments.  Izzy goes to one independent medical evaluation and that doctor says he’s suffered a 20% permanent impairment of his respiratory function as a result of COVID 19.  The insurance company sends Izzy to their independent medical evaluator, and that doctor rates him as 10% permanently injured.

At this point, Izzy would likely go to a hearing[3] and a Workers’ Compensation Commissioner would review both physician reports as well as listen to Izzy testify about what symptoms he’s still having, such as difficulty breathing or pain in his chest.  At that point, the Commissioner would assign a percentage of permanent impairment to Izzy’s lungs.  That number is very important.  In the Workers’ Compensation system, we speak of different “tiers” of payments.  If someone is awarded less than 75 weeks of payments, they receive payment at the Tier one rate, which is 1/3 of their average weekly wage up to a statutory maximum.  If the person receives 75 weeks or more of payments, they receive the higher Tier two payment rate, which equals 2/3 of their average weekly wage, up to a statutory maximum.  The difference between receiving a Tier one rating vs. a Tier two rating means thousands of dollars for an injured worker.

In Izzy’s case, he wants to get an award of at least 15% from the Commissioner, because 15% of a maximum possible of 500 weeks = 75 weeks.  A 15% rating or above will get him the Tier two rate.  Any rating lower than 15% will get him the Tier one rating.  Much rides on the ratings of the different doctors as well as how Izzy communicates his symptoms to the Commissioner.

Physical effects are not the only ones that may be relevant.  Workers’ Compensation in Maryland also at times allows someone to be compensated for psychological harm incurred as a result of an incident at work.

I think it’s important to keep in mind that there are two classes of individuals who may claim psychological harm as a result of COVID-19: those who actually become infected with the disease, and those who have to work in the incredibly difficult circumstances of healthcare clinics with high rates of the disease.

As to the first group of individuals, those who actually become infected with COVID-19: the Courts in Maryland do recognize psychological harm as something that can arise out an “accidental personal injury” that one suffers at work.  Belcher v. T. Rowe Price, 329 Md. 709 (1993) is a case in which Maryland’s highest courts examined the concept of psychological harm in workers’ compensation case.  In that case, the claimant was at work when a huge construction beam came crashing through the roof.  Although she was not physically harmed, she suffered psychological detriments.  This is what the Courts deem a “mental-mental” situation: a mental stimulus (the fear of the crashing beam) induces “mental” suffering.  The Court held that claimants could seek Workers’ Compensation benefits for psychological injuries, as long as the mental harms were induced by a “sudden or violent” event, and that the psychological harms were capable of objective determination.

COVID-19 is a bit different, in that the anxiety an infected person suffers is not a “mental-mental” event, but rather a “physical-mental” event: a “physical” cause (infection of one’s body with a disease” provokes possible “mental” effects (anxiety, depression, etc.)  It remains to be seen whether the Commission and Courts will apply the same standard of requiring a “sudden and violent” accident to induce the psychological harms, or whether perhaps the law will be more lenient in the case of COVID-19, where a definite physical harm is suffered.

The second class of workers who may be entitled to benefits are healthcare workers who perhaps were not infected themselves, but had to show up to work day in and day out during the pandemic and deal with the incredibly difficult scenario of treating COVID 19 patients and perhaps watching many of those patients lose their lives in a very painful way.  The Court of Appeals has recognized that post-traumatic stress disorder (PTSD) can be a compensable “occupational disease” for workers’ compensation purposes in certain situations.  The key case is Means v. Baltimore County, 344 Md. 661 (1997).  That case involved a paramedic who through the course of her work was exposed to several “gruesome” accident scenes, and eventually developed PTSD as a result.  The Court held that PTSD may be a compensable occupational disease if: 1) the employment is of such a nature that the risk of PTSD is a hazard of that particular employment; and 2) the PTSD is contracted as the result of an in the course of employment and causes the employee to become incapacitated.

There’s certainly an argument to be made that healthcare workers who develop PTSD based on what they experienced through the pandemic may have a valid occupational disease claim.  One hurdle is that, traditionally, occupational disease must develop in a “slow and insidious” manner.  The pandemic has only lasted a few months so far, and it’s unclear how long it will go on for.  It may not last for a long enough time to allow for “slow and insidious” development of PTSD, although that may be an issue that needs to be litigated.

Contact us or call us at 410-753-4611 to discuss work-related COVID-19 or any other question you may have about workers’ compensation in Maryland.

[1] George Citroner.  What We Know About The Long-Term Effects of Covid-19.  Healthline.  April 21, 2020.  https://www.healthline.com/health-news/what-we-know-about-the-long-term-effects-of-covid-19

[3] However, it’s also possible that his case would be settled without having to go to a hearing