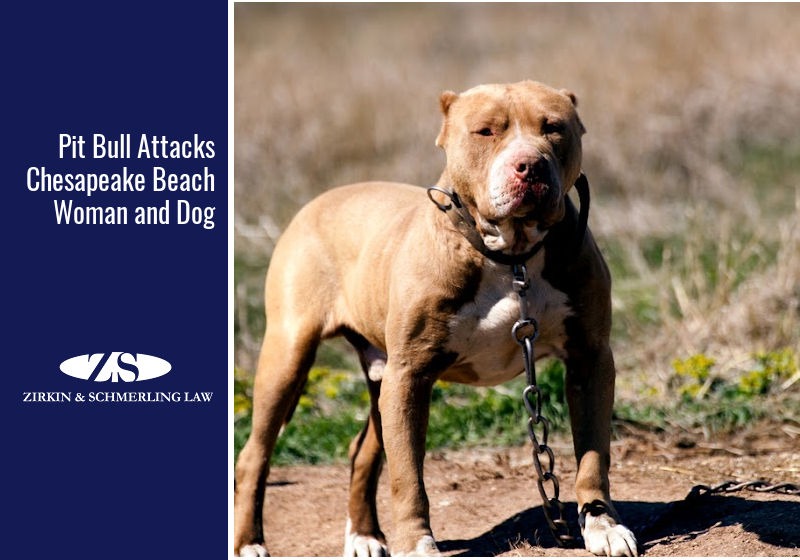 Although dogs are usually great companions, they can be potentially dangerous in certain circumstances. Dog attacks can be deadly and leave people with severe injuries, and their attacks can even be fatal. Numerous Americans are injured due to dog attacks every year. Pit Bulls are especially notorious for causing harm, but every dog breed has the potential to attack.

One significant incident that illustrates the dangers of dog attacks occurred in Maryland in Chesapeake Beach. A woman was walking her dog when they were both unexpectedly attacked by a loose Pit Bull. The incident demonstrates the importance of understanding Maryland dog bite laws, and it also shows why it’s critical to never leave your dog unattended, especially if they show signs of aggression. As a Maryland resident, you need to be aware of the laws that govern dog bites and your legal options if you’re attacked by a dog.

On a normal Fall afternoon, a woman was walking her dog in Chesapeake Beach when a loose Pit Bull unexpectedly approached them. The grey female Pit Bull and the woman’s dog briefly sniffed one another, but then the Pit Bull suddenly attacked and began biting the dog’s head, neck, and shoulder.

The woman attempted to protect her pet by separating the two dogs, but the Pit Bull then lunged at her. The Pit Bull bit her right hand and right calf, causing serious injuries. Thankfully, someone called 911, and medical professionals assisted the woman quickly.

Bystanders informed the authorities that the owner of the loose Pit Bull lived near the scene of the attack. When questioned, the owner stated someone must have let the Pit Bull out of her fenced-in yard. She also stated that the dog had recently had puppies, which may have made her more aggressive because of maternal instincts.

In response to the attack and the Pit Bull’s lack of vaccination records, Animal Control requested that the Pit Bull be quarantined for ten days. Vaccination records for the dog were critical in this situation because medical professionals were unsure whether the Pit Bull had contracted rabies before biting and potentially infecting the victim. Additionally, the dog’s owner was served dangerous animal designation papers, meaning that the animal has killed or inflicted severe injuries on a person without being provoked.

The incident that occurred in Chesapeake Beach illustrates the importance of knowing Maryland’s dog bite laws and what you should do if you or a loved one is attacked by a dog. The code of Maryland section 3-1901 states that the dog’s owner is “liable for any injury, death, or loss to person or property that is caused by the dog, while the dog is running at large.” The law also deals with incidents outside the scope of dog bites. For example, a dog could knock a person over, and the dog’s owner would still be liable for the injuries.

When dealing with injuries caused by dogs, it’s critical to know whether your state is a strict liability state, one-bite state, or a mix of the two. A one-bite state, which is also known as “the one-bite rule” and “first bite free,” means that the owner of the dog is held liable if the dog has already bitten somebody previously.

When Is the Dog’s Owner Not Liable for Damages?

In Maryland there are several circumstances where a dog owner would be held liable even if it is a first-time bite.  An example of this would be if the dog is running around in public without a leash.  Another example would be if the dog showed a prior vicious propensity.  However, there are instances in which the dog’s owner would not be held liable for injuries. The owner wouldn’t be held liable if the injured person was trespassing on the dog owner’s property. Additionally, the victim wouldn’t be able to receive damages if they were committing a crime or attempting to commit a crime on the owner’s property.

What Should I Do If I’m Bitten by a Dog in Maryland?

As long as you didn’t provoke the dog, trespass, or attempt to commit a crime, you’ll likely have a case against the dog’s owner if you’re injured, but you need to discuss your situation with an attorney that specializes in dog bite cases. Your ability to receive compensation will depend on your unique case, so you need seasoned dog bite lawyers to assist you. If you were injured by a dog in Maryland, call Zirkin & Schmerling Law. We’ve been able to reach large dog bite settlements and verdicts. We can help you receive the compensationyou deserve for your injuries. We offer 24/7 free consultations, so call 410-753-6411 or contact us online