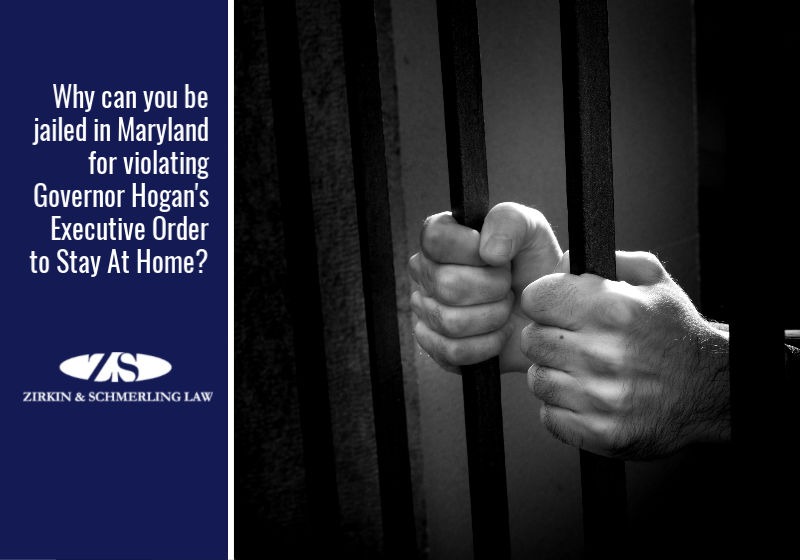 Why can you be jailed in Maryland for violating Governor Hogan’s Executive Order to Stay At Home?

Here’s what you need to know:

I’m sure a lot of Marylanders were concerned when, on Monday March 30, 2020, Governor Larry Hogan announced his Order that dictated, with certain exceptions, “All persons living in the State of Maryland are hereby ordered, effective as of 8:00 p.m. on March 30, 2020, to stay in their homes…” and that anyone who “knowingly and willfully violated this Order is guilty of a misdemeanor and on conviction is subject to imprisonment not exceeding one year or a fine not exceeding $5,000 or both.” Even more concerning to many was that there was no end date to this Order.

What was striking to me was how many attorneys in Maryland lit up their own Facebook feeds and attorney message boards with reactions of disbelief that such an order could be legal. The general theme of the reactions I was seeing from the legal community at the thought that members of the general public not covered by an exception could face prosecution if they did not obey this order was, “We’ll see about that!”

Well, for all of you skeptics, the answer is that the Governor did exactly what the Legislature authorized him to do in 2004.

Maryland’s Public Safety Article, Title 14, Subtitle 3A sets out the Governor’s Health Emergency Powers. “If the Governor determines that a catastrophic health emergency exists, the Governor may issue a proclamation under this subtitle.” MD Public Safety Ann. § 14-3A-02(a). Obviously, a Governor can’t just do this whenever he or she feels like it. Section (b) of this statute states: The proclamation shall indicate:

How long can this type of Order last? Section (c) of that subtitle clearly indicates the duration of these proclamations:

What can the Governor order pursuant to these powers? Well, actually a lot. But as it applies to the most likely readers of this article, who would be categorized as the “general public,” under MD Public Safety Ann. § 14-3A-03(d):

Failure to comply with these orders have a prescribed penalty. And, no coincidence, as authorized by law under MD Public Safety Ann. § 14-3A-08(a)(2), a person who knowingly and willfully fails to comply with an order, requirement, or directive issued under this law is guilty of a misdemeanor and on conviction is subject to imprisonment not exceeding 1 year or a fine not exceeding $ 5,000 or both.

So, for everyone who thinks this can’t be real or enforceable for a Governor just to issue an order and suddenly it’s criminal not to obey it, this is very real and very enforceable.

Who specifically does this impact?

First, the Governor’s Proclamation has a long list of exceptions as to whom his Order applies. If you aren’t exempted, then it applies to you. If you are not sure if you may be exempted by this order, this link takes you to the Governor’s Order. Pages 2 through 7 clearly dictate who is fine and who must stay at home.

Second, remember all crimes have elements and require proof. The most important elements that you should be aware of is the intent element to this crime: “knowingly and willfully.” If you’ve been in Maryland though for any amount of time after March 30, 2020, it is hard not to notice that everyone’s acting a little different. Pleading ignorance that there is some kind of Order in effect is not a defense here. But maybe you thought one of the exceptions applied to you and it turns out it was a close call. That may not be a willful violation of the law.

If you are reading this article, then the next thing you should be doing is acclimating yourself with the Governor’s Order to see if it does or does not always apply to you. The answer just might be sometimes yes. For example, if you do not work in a field that allows you to be out of the home, that does not mean you cannot still step out of your home with your spouse to take a walk for the purpose of getting some exercise. Page 3 of the Governor’s Order covers how you can still do that.

Before leaving your home, review this law so that you can explain to an officer how you know you are not in violation. Remember, this article includes above the most recent Governor’s Order. But this could change after this blog post is published. For the most up-to-date rules, you can visit https://governor.maryland.gov/. This is where the Governor posts his Executive Orders.

Does this mean that when you get on the road, you will definitely be stopped by a police officer?

The short answer is no but you should behave as if you were expecting a yes. For example, our law firm has still been representing clients at bail reviews even though the courts are largely closed to the public except in limited circumstances like bail reviews. I don’t live at the courthouse. (Sure felt like I did before this epidemic.) I’ve got to get to court somehow to represent my clients for these matters. Just because I know I’m authorized to be driving to court in this specific circumstance doesn’t mean an officer won’t stop me just to investigate what I’m doing on the road. And still, no one has stopped me yet on the highway while commuting to the courthouse.

As reported by the Baltimore Sun on March 31, 2020, police throughout the state are treating this very seriously, but they aren’t just stopping everyone on the roads. For example:

“If, in the course of the regular performance of his/her duties, such as during a crash investigation or a traffic stop, the trooper develops information indicating the individual was engaged in non-essential travel, enforcement action can be taken, in consultation with the state’s attorney’s office in that jurisdiction,” a state police statement said.

It is important for all of us to remember that while statements from certain police departments like these make it seem like you won’t get pulled over just for being on the road, you still very much can. And if you are stopped, the officer is doing so lawfully because he or she is authorized by a valid Governor’s Order.

What should you do if you are charged with violating the Governor’s Order during this epidemic?

First, remember that if you speak to the police, your statements are treated as admissions. If you gambled and chose to violate the stay-at-home order, it would be best to be polite to the officer and elect to remain silent.

Second, you should hire an attorney who knows the law, is taking this serious and doesn’t just wrongly assume that the State’s Attorney’s Office will take a light attitude to this. Jail is on the line here and you need an attorney who is prepared for the realities of the situation. For issues involving arrests of this nature, or any other felony or misdemeanor, the attorneys at Zirkin & Schmerling Law can help. Contact us or call us at 410-753-4611 to set up an appointment with one of our attorneys today.