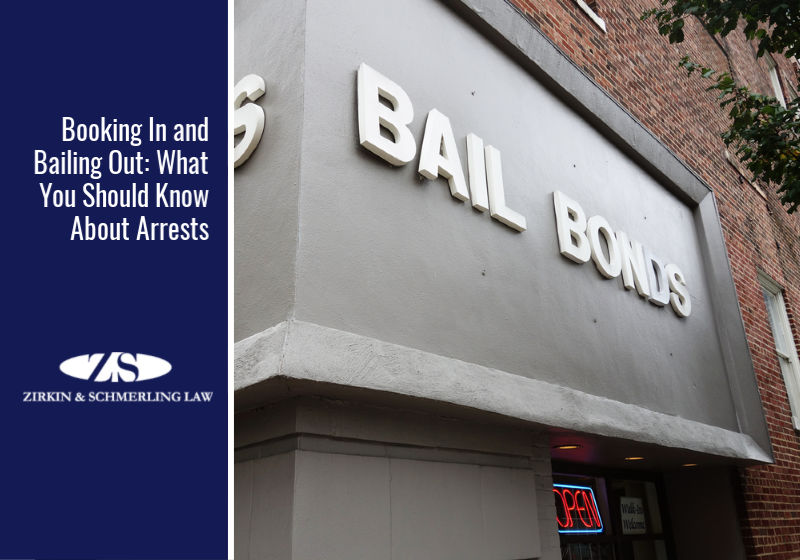 If you’re arrested, you’ll be booked into jail and will soon face a legal process known as bail review. This is a critical moment in your life when you need the best legal representation possible. What happens next affects your future and your freedom.

Most people aren’t prepared for the highly-stressful bail review process until it’s already happening to them. So let’s take a closer look at how the booking and bail system works, as well as the best way to handle it if you ever find yourself in this situation.

What Happens When You’re Arrested and Booked?

When you’re arrested, a police officer takes you into custody wherever they encounter you – at home, at work, at your child’s school, at the grocery store. It could happen anywhere and anytime, with or without a warrant depending on the circumstances.

The officer then transports you to a detention center of some kind, which is usually the county jail. The local detention center handles booking you, which means they’ll enter your information into a computer system for tracking purposes. You may be fingerprinted and photographed at this time. A detention center employee will ask you for your personal information.

While you sit in a holding area, you’ll join a long list of people waiting for the system to grind along. But at this point, things move much more quickly than you might expect. Within 24 hours, you will be taken before a commissioner to go through a process called a bail hearing.

How you handle your bail hearing is very important so be forewarned.

Here’s How a Bail Hearing and Bail Review Works

Your bail hearing takes place first. It will be presided over by a Commissioner. Bail hearings take place 24 hours a day, 365 days of the year. This appearances is recorded.

The only people present in the room will be you and the Commissioner. You have a right to an attorney for this hearing. Commissioners are supposed to ask if you want to be represented for this hearing. If you have already hired an attorney, and you were not able to notify them of the hearing time, many Commissioners will contact the attorney for you if you provide them a phone number. So it is very important to know your attorney’s office’s phone number before you get arrested.

At your bail hearing, you’ll receive a copy of your charge papers and, ultimately, will find out whether you’ll be released on your own recognizance, be eligible for release if you post a bail, or be held without bail.

If they decide you should not be immediately released, you’ll be returned to the detention center. On the next business day, you’ll appear before a district court judge for a bail review.

During both a bail hearing and a bail review, a judge will evaluate the circumstances of your situation and decide whether or not you should be released. This determination is made based on two important factors: whether you are a danger to the community and whether you are a flight risk.

In terms of your flight risk, the judge will look at factors like whether you grew up in the area, whether you’re employed nearby, and what kinds of connections you have in the community through your activities, hobbies, church, sports, and so forth. Also, it will be counted against you if you have previously failed to appear for court appearances, even if the charges were ultimately dropped.

Why Does it Help to Have a Criminal Defense Lawyer?

Here’s why it’s vital to have the help of an experienced criminal defense attorney: Time is limited to make your case during a bail hearing or bail review. You’ll have only a few minutes to show the Commissioner and/or judge you deserve your freedom.

Say something wrong at this point, and you’ll go straight back to jail. The judge doesn’t care about your opinion, your stress, or your family. Their priority is to protect the community and continue moving you through the legal system. Also, saying something wrong during this recorded court appearance could be held against as evidence in the eventual trial.

At this important hearing, your lawyer can help you make a good impression and show your community connections to prove you aren’t a flight risk. For example, your lawyer might show that certain evidence is not part of the State’s case making the allegation that you are a danger to the community more tenuous. Or they might bring in your family members to show your strong ties to a healthy and positive community.

Remember, time is extremely short in these situations. You usually have less than 24 hours to talk to your lawyer and prepare for a fast-paced bail hearing and/or bail review. Make sure you choose a Maryland criminal defense lawyer with plenty of experience helping people get the best outcomes possible.

Have a Legal Question About Your Arrest or Making Bail? We Have Answers

For issues involving arrests and bailing out, the attorneys at Zirkin and Schmerling Law can help. Contact us or call us at 410-753-4611 to set up an appointment with one of our attorneys today.