What Is the Typical Herniated Disc Car Accident Settlement?
Skip to content 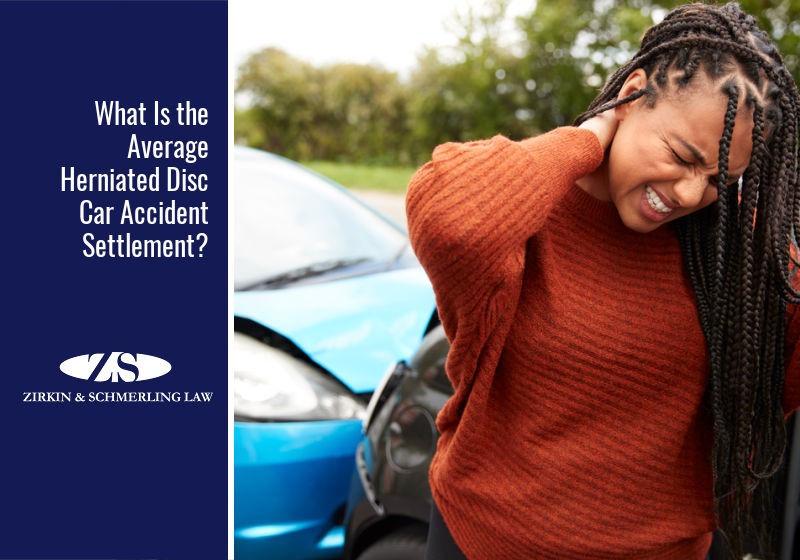 Suffering from a car accident can lead to numerous painful and serious injuries, including a herniated disc injury. Bulging and herniated discs are exceedingly common after vehicular collisions because the force of impact puts pressure on the spine, causing significant damage.

The severity of these injuries varies from case to case, and while less severe herniated disc injuries only require over-the-counter anti-inflammatory medications and physical therapy, more severe cases may require costly surgeries and rehabilitation.

If you experience one of these injuries as a result of a negligent driver, you need to seek a herniated disc car accident settlement for your medical bills. This is especially important if you suffer from a serious herniated disc injury because you may experience permanent nerve damage or even paralysis.

Here’s what you need to know about having a herniated disc from a car accident and recovering the compensation you deserve.

What Is a Herniated Disc Injury?

Before we dive into the details of herniated disc injuries, it’s helpful to first understand the anatomy of the spine.

You’re likely aware that your spinal cord is made up of individual vertebrae. People are born with 33 individual vertebrae, but adults often only have 24 because vertebrae fuse together over time. There are different sections of your vertebrae, including the cervical spine, thoracic spine, lumbar, sacral spine, and coccyx (tailbone), and each section contains individually numbered vertebrae. These include:

There’s a disc between every pair of vertebrae that keeps the spine together while also absorbing shock and helping spinal mobility. The discs have soft centers and tougher outer shells.

A herniated disc refers to when the tough outer casing breaks and allows the soft tissue in the center to come out. This leads to pain in the spine because it compresses the nerves.

The area of the spine that’s most likely to receive a herniated disc after a car accident is the cervical spine, which is in your neck. The most common injured discs are between the C4-C5 and C5-C6.

Disc herniations often come with notable symptoms, but this is not always the case. Someone may suffer from a herniated disc while having no tell-tale signs of pain and discomfort. That’s why it’s especially important to visit a doctor after experiencing a car accident — you may not even have symptoms of a serious injury.

Those who do suffer from symptoms after a herniated disc may experience:

If you suspect that you’ve suffered from a disc herniation, you need to undergo medical treatment as soon as possible. When a herniated disc goes untreated, a person may suffer from extremity numbness and may even eventually develop paralysis.

The primary way in which medical professionals will identify whether a person suffers from a herniated disc is through the use of a magnetic resonance imaging (MRI) machine. Your MRI can also be used as evidence when filing a herniated disc car accident settlement.

If you suffered from a herniated disc or another personal injury as a direct result of another driver’s negligence, you have every right to file a personal injury claim against them.

The amount you’ll be able to recover for your herniated disc will depend on your case, including the severity of your injuries and any permanent disabilities you may suffer as a result.

Additionally, it’s critical to note that you need to be able to provide sufficient evidence showing that the other driver was at fault and that the accident directly caused your herniated disc injury. Some forms of evidence you can use include:

It’s crucial to provide evidence that the other driver was exclusively at fault because Maryland is a comparative negligence system. This means that if you had any role in causing the accident, you cannot recover compensation for your personal injuries from the other driver, even if your role was negligible compared to the other party.

In order to recover compensation for a herniated disc, you need to provide sufficient evidence that the other driver is liable for your injury. You can increase your chances of settling or winning your case by enlisting the expertise of a Maryland personal injury attorney. A skilled attorney will help you prove your claim by subpoenaing evidence, such as cell phone records and credit card transactions, and they can gather expert witnesses, such as medical experts and accident reconstruction experts, to prove your case. A seasoned attorney will also help you maximize the amount you receive for your herniated disc injury.

For expert legal support in Maryland, contact the attorneys at Zirkin & Schmerling Law. We’ll work to help you recover the compensation you deserve including property damage, medical bills, lost wages, pain and suffering, loss of future earnings, and more. Call our office at 410-753-4611, or get a free case consultation here.