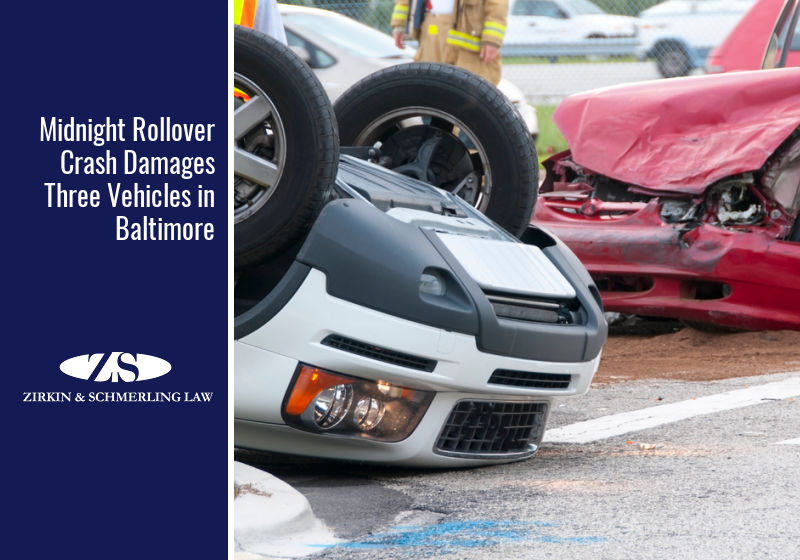 Back in June of this year, a multi-car wreck occurred at the intersection of North Caroline Street and East Fayette Street in Baltimore. The wreck involved a rolling vehicle that could have caused fatal injuries. Fortunately, no one involved in the crashwas seriously injured, but it does illustrate the importance of staying safe on the road and avoiding potentially fatal rollover accidents.

In this blog, you’ll learn all about common causes of rollover accidents, subsequent injuries that may occur, and contributory negligence in Baltimore.

Shortly after midnight in early June, a driver of a 2017 Chevrolet Equinox made a sudden left turn at the intersection of North Caroline Street and East Fayette Street. A 2010 Chevrolet Traverse was unable to avoid the Equinox. The Traverse hit the Equinox which then resulted in the vehicle rolling into the opposite lane of East Fayette Street. A 2008 BMW 535i was unable to avoid the rolling Equinox and was also caught up in the wreck. The police responded to the scene promptly, and all of the occupants of the three vehicles insisted that they didn’t need medical treatment.

If you experience a crash, you need to evaluate the severity of your injuries and call 911. You should also accept medical treatment at the scene of the accident.

There are a few major causes of rollover accidents you need to be aware of to stay safe on the road. One major contributor to rollover wrecks is when a vehicle goes off of the main road. This often occurs with certain road conditions, but negligence can also play a large role. Rollover accidents often occur in slick road conditions, such as heavy rain, sleet, and ice. Speeding and swerving can also cause a driver to run off of the road and experience a rollover wreck. You could also roll your car if you speed and take too sharp of a turn.

Rollover traffic accidents can result in serious and even fatal injuries. It’s common for vehicle occupants to be ejected during a rollover accident, and ejection can lead to fatalities.

Common rollover crash injuries include lacerations, traumatic brain injuries (TBI), back injuries, neck injuries, and broken bones. Experiencing a rollover accident can have life-altering consequences. Any number of the common injuries that occur can leave you impaired for the rest of your life, especially if you experience a traumatic brain injury or neck injury. You could be permanently paralyzed if your spinal nerves are damaged or severed.

Maryland is a contributory negligence state, meaning that if someone is partially to blame for an injury, they won’t be able to recover compensation from the opposite party. What this means is that if you were at all responsible for a wreck, you can’t recover compensation for personal injuries, even if your role in the wreck was negligible.

For example, if a driver causes a rollover accident because they were texting, they may be assigned primary blame. The driver they hit could share a small percentage of the blame if they were doing something negligent. In this case, the driver that was hit wouldn’t be able to recover damages for their injuries.

Something important to note is that contributory negligence doesn’t apply to seatbelt usage. If you’re struck by a vehicle and you sustained serious injuries because you weren’t wearing a seatbelt, you can still recover damages from the negligent driver if you weren’t at fault for the wreck. This is especially critical to note in rollover wrecks because vehicle ejection is common.

If you or a loved one were injured in a rollover accident or any other type of vehicular accident, you need dedicated car accident lawyers to help you get the compensation you deserve. The attorneys at Zirkin & Schmerling Law have helped their clients receive millions of dollars from car crashes.. Contact our office at 410-753-4611 or click here for a free consultation.