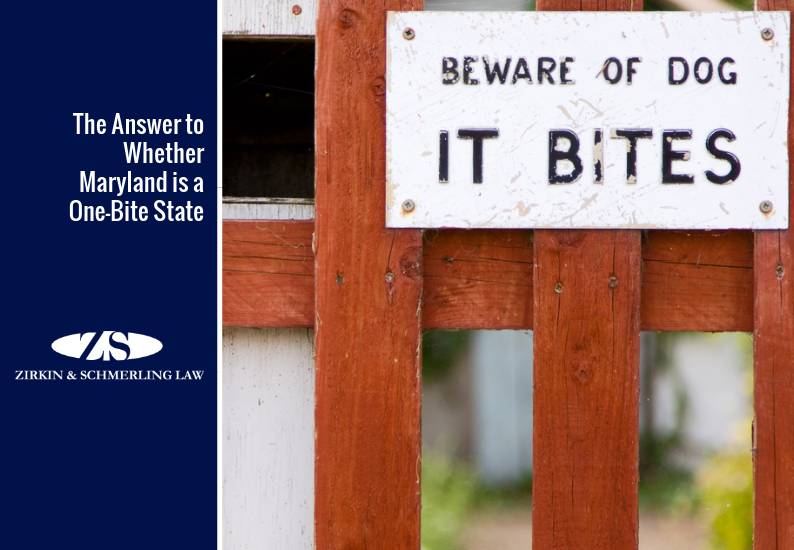 We realize this legal issue goes by many names across the nation, including “the one-bite rule” and “first bite free,” A one bite state holds that the owner is responsible if the dog has bit before.

Of course, there’s been a lot of confusion about this topic here in the state of Maryland. Part of the confusion comes from a recent change to the Maryland dog bite laws.

Prior to 2014, Maryland dog bite rules were laxer. After sweeping changes to the law in 2014, the owner of a dog that is running at large can now be held strictly liable for injuries and other damages caused by the animal.

The average person often misunderstands what “strict liability” means, so let me clarify. Strict liability means if someone sues over a dog bite, they won’t have to prove in maryland court that the dog’s owner was somehow negligent.

So, is Maryland a one-bite state? No. Maryland dog bite law has many intricacies and is very fact specific.

A recent news story brings this issue back into the public eye. Prince George’s County police encountered two Rottweilers running loose and intimidating people on city streets. A construction worker reported that one of the dangerous dogs bit her on the leg.

While trying to corner the dogs and wait for Animal Control to arrive, police observed that the dogs were becoming agitated. One of the dogs lunged at an officer. The officer shot and wounded the dog.

Police located the two dogs’ owner for a notification that they were now with Animal Control. The dog that was shot survived the injury but was later euthanized. The other dog was quarantined for 10 days.

While the legal outcome of this incident is yet to be determined, it does seem that the dogs were roaming in violation of Maryland law.

Maryland Does Have Legal Defenses for Dog Bite Claims

If your dog bites someone in Baltimore and the case doesn’t fall under the state’s strict liability statute, there are legal defenses you can pursue. You may be able to prove that the bite victim contributed to their own injury under the legal concept of “contributory negligence.”

Generally speaking, when it’s proven that the person contributed even 1% to their own dog bite injury, they can’t receive compensation. Here are some examples:

We’re seeing new cases constantly that involve people being tripped, knocked over and pushed into dangerous debris by dogs.

When a dog runs between someone’s legs or jumps on them, it can set off a sequence of events that results in severe injuries to the person’s pelvis, back, neck or brain. According to the Centers for Disease Control, more than 76,000 people per year visit emergency rooms due to non-bite dog injuries, like falls.

A small but aggressive dog can be just as dangerous as a large dog. Research shows that most dog attack fatalities involve people under the age of 10 (55%) or over the age of 65 (24%) who are simply less physically able to fend off a dog of any size.

Reduce the risk that you will be bitten by a dog, or that your dog will bite someone, by following these guidelines:

Have a Legal Question About Maryland Dog Bites? We Have Answers

If you have suffered injury from a dog bite, the attorneys at Zirkin and Schmerling Law are experts at answering all your questions and guiding you through the challenging process of Maryland dog bite law. We can help you hold the right person responsible for your injuries and file suit for damages. Contact us or call us at 410-753-4611 to set up an appointment with one of our dog bite attorneys today.