Suspect A Birth Injury To You Or Your Baby? - Zirkin and Schmerling Law
Skip to content 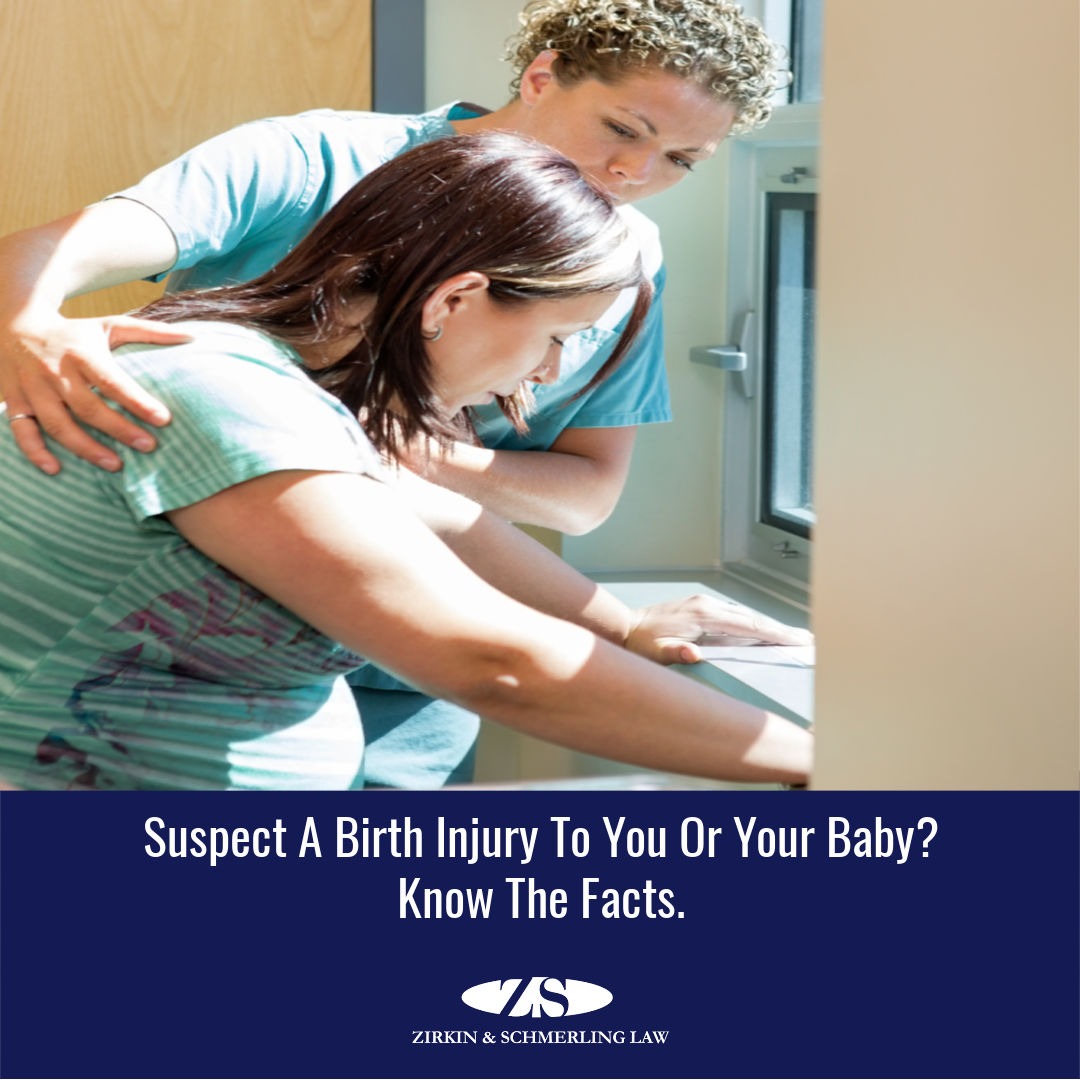 Traditionally, the day of a baby’s birth is celebrated with festive flower deliveries, joyous phone calls, toasts to the baby’s health, Facebook posts, and even the passing out of cigars. It is tragic when what should be an incredibly happy event is fraught with anxiety, fear, and uncertainty. Unfortunately, about 10% of babies are born with (sometimes fatal) defects, or suffer often preventable injuries in the process of being born.

Birth defects are caused by a mix of factors, including:

Birth injuries happen during birth. Some of them are preventable and are caused by improperly managed pregnancy, labor, delivery, prenatal, or newborn care.

Brachial plexus injuries: these happen in one to three out of every 1,000 births and happen when the network of nerves between the neck and the shoulders is stretched, compressed, or torn during a difficult delivery. It is caused by large babies, birth in the breech position, prolonged or difficult labors, and instrument-assisted or vacuum-assisted births.

Erb’s Palsy: One or two out of every 1,000 babies have this condition. It is caused by the brachial plexus injury brought on by a baby’s neck stretching to the side during a difficult delivery. The infant will need daily physical therapy exercises to strengthen the arm’s weakness and regain motion in it.

There are four main types of Cerebral Palsy:

Spastic CP: This is delineated by stiff muscles making awkward movements. It can affect the legs, one side of the body, or all four limbs. Also included are intellectual disabilities, seizures, and problems with vision, hearing, or speech.
Dyskinetic CP: In this type of CP, the muscles can make uncontrollable movements. It can be difficult to walk, sit, swallow, or speak.

Ataxic CP: This involves difficulty with balance or coordination. It is the least common form of CP.

Mixed CP: This is exactly what it sounds like- a mixture of symptoms. The most common type is mixed spastic-dyskinetic CP.

Some factors leading to Cerebral Palsy are:

Brain damage: The primary cause of brain damage before or during birth is a deficiency or complete lack of oxygen. This can happen with umbilical cord issues, such as when the cord is twisted, pinched, or wrapped around the baby’s neck. Brain damage can also be caused by head trauma from a difficult delivery.

Shoulder dystocia: This is a birth trauma that happens when one or both shoulders get stuck in the mother’s pelvis during delivery. It happens in .2-3% of deliveries and can cause fractures, injuries to the brachial plexus nerves, or asphyxia (lack of oxygen). It can also cause injuries to the mother such as PPH (postpartum hemorrhage), tearing of the perineum, or (rarely) uterine rupture. Several factors lead to this, but the most common are forceps or vacuum-assisted deliveries.

Cephalohematoma: This accumulation of blood under the scalp occurs in 0.4% to 2.5% of all live births. It develops in the hours and days after birth and is most prevalent in large babies, babies in the transverse position at the beginning of labor, extremely long labors, and following births where vacuum extractors or instruments were used.

Kernicterus: If jaundice is not noticed or is left untreated, it can result in kernicterus, a build-up of bilirubin. This condition can lead to athetoid cerebral palsy, hearing loss, problems with vision and/or teeth, and intellectual disabilities.

How can the birth process go wrong?

In most cases, doctors, nurses, and anesthesiologists work hard to achieve healthy outcomes for both mothers and babies when it comes to childbirth. Unfortunately, sometimes careless or preventable mistakes happen.

If you or your child has been injured before, during, or after childbirth, you will want to seek the advice of another medical professional as well as an experienced birth injury attorney.

To win a birth injury lawsuit, your attorney will have to prove three things:

The last one is probably the easiest to prove, since medical bills, physical therapy bills, and medication bills are all concrete and measurable.

It’s time to hold the right people responsible for your child’s circumstances. You and your child need an aggressive and competent attorney to fight for your child’s rights and secure your family’s financial future. With the lawyers at Zirkin & Schmerling in your corner, you can be assured that you have a team on your side who will fight passionately for your child.

If your child suffered an injury at birth or during the neonatal period, call the lawyers at Zirkin & Schmerling at 410-753-4611 to discuss what we might be able to do to help.