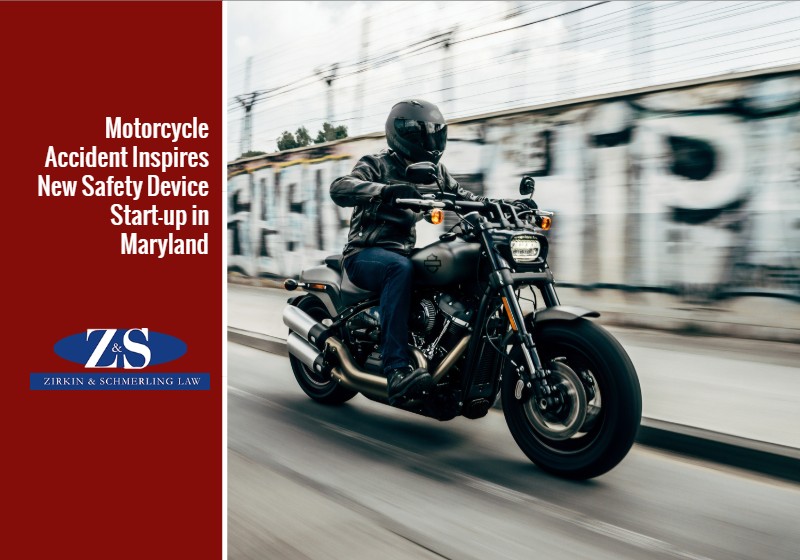 Most people who perish in Maryland motorcycle accidents are wearing helmets.

It’s a startling fact we saw recently: 85% of Maryland motorcyclists involved in a crash are wearing a helmet at the time of the collision.

These stats tell us something important: Protective gear just isn’t enough. After a motorcycle accident, every moment matters. Getting urgent help is the priority.

Stunt man Kenny Kelley, who is a Maryland native, survived a motorcycle crash feeling thoroughly shaken by the experience. He was unable to reach his cell phone while lying injured on the side of I-95 and had to rely on strangers to call for help.

Afterward, Kenny not only recovered fully from his motorcycle crash injuries, the accident sparked in him an interesting entrepreneurial idea. He recently developed the Silent Beacon, a small device that a motorcyclist can wear close to their body and press for help. Even with limited mobility, you can trigger the device to connect to your cellphone and make an emergency call, including speaking aloud with 911.

The Silent Beacon is also becoming popular among drivers other than motorcyclists, including commuters and travelers who are especially concerned about getting help in a crisis on the road. It can be used as a keychain, worn as a necklace or bracelet, or attached to a purse or belt loop.

Motorcyclists in Baltimore may be enjoying their last rides of the season, although recent accidents show the danger of Maryland roads – no matter the weather.

Our roads are extremely dangerous for motorcyclists. We have winding roadways with all kinds of hazards popping up along the way: construction zones, leaf and grass debris, loose rocks, ice, snow, fog and crumbling road asphalt that can easily cause a motorcycle to slide.

In Baltimore and Cecil counties, a high number of motorcycle fatalities recently spurred a police investigation into the causes. In late spring, on one day, within a matter of hours from one another, three people died in motorcycle accidents: Sidney Green of Windsor Mill and John Smith and Brittny Winter, who were visiting from Pennsylvania.

Two days later on the Arundel Expressway, Jack Vance of Glen Burnie died while making a lane change. We’d like to point out that the news report noted Mr. Vance was traveling at minimal speed and wearing a helmet at the time of the collision.

Then in late summer, motorcyclist Jared Stewart slid across a grass median in Prince George’s County and crashed into two other motorcyclists who were stopped on the shoulder of an off-ramp. Mr. Stewart died, and the other two motorcyclists were lucky enough to survive the collision.

Police and highway safety investigators are studying why Maryland roads are so prone to these kinds of motorcycle accidents. Many of our busiest roads are above the national average for crashes. And certain highways, like the Jones Falls Expressway, are double Maryland’s average for crashes.

Aggressive driving and speeding are contributors. Baltimore is frequently ranked by insurance companies as having the worst drivers in America. Research also indicates that Maryland roads have a dangerous combination of horizontal and vertical curves, varying speed limits, dense traffic patterns and other inherent risks for motorcyclists.

With all of this in mind, we’d like to share some motorcycle safety tips that will help you enjoy Maryland’s beautiful roads while staying safe during the ride.

Have a Legal Question About Motorcycle Accidents In Baltimore? We Have Answers.

If you have been in a motorcycle accident, the attorneys at Zirkin and Schmerling Law are experts at answering all your questions and guiding you through the challenging process of Maryland motorcycle accident law. We can help you hold the right person responsible for your injuries and file suit for damages. Contact us or call us at 410-753-4611 to set up an appointment with one of ourmotorcycle accident attorneys today.