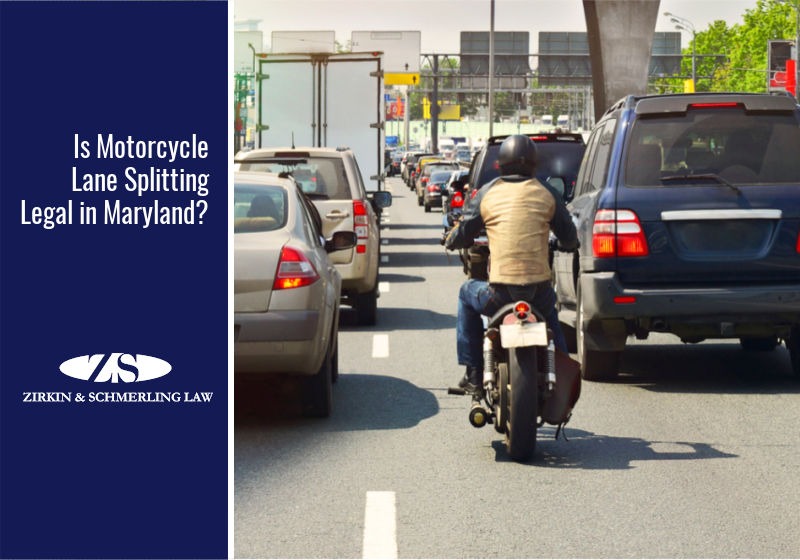 Motorcycle accident attorneys often come across cases that involve lane splitting, which happens when a motorcyclist tries to share the same lane of travel with another driver. Lane splitting goes by many names, including lane sharing, lane filtering, stripe-riding, and white-lining.

In a classic lane splitting situation, a motorcyclist creeps up between vehicles in slow or stopped traffic. When this occurs at a stoplight, it is sometimes called lane filtering because a motorcyclist – or a group of motorcyclists – filters up through stopped vehicles to try to keep moving ahead without stopping.

Lane splitting is a cause of traffic accidents because it creates movement other drivers don’t expect. A motorcyclist can easily be struck or run over by another motorist who doesn’t predict that a motorcyclist will be present in their lane.

Lane splitting may be dangerous, but is it legal? Let’s take a closer look.

The law of Maryland is clear when it comes to lane splitting: motorcyclists should not share lanes with other motorists or ride the line between lanes. In addition, a motorcyclist can’t use the excuse, “I was just trying to pass” to justify lane splitting.

Motorcyclists sometimes believe there is a “grey area” in this law that allows them to drift into a lane momentarily during the act of passing a car, but there is no grey area here. In addition, a motorcyclist may believe they are allowed to briefly creep into another motorist’s lane while attempting to bypass the vehicle to make a right turn, but this is also illegal in Maryland.

If lane splitting is illegal, why is there so much confusion about it? Surprisingly, many people support lane splitting, including both motorcyclists and other motorists on Maryland’s roads.

Some say lane splitting actually prevents accidents because it allows motorcyclists to avoid traffic jams and other situations where they’re at risk of a vehicle striking them in traffic. From this point of view, lane splitting gives a motorcyclist safety options.

For example, imagine being a motorcyclist approaching stopped traffic in a construction zone on a high-speed interstate. As a motorcyclist, you must bring your bike to a complete stop behind a large clump of cars, putting you at immediate risk of being rear-ended by a fast-moving motorist who isn’t paying attention. By moving ahead slightly into another vehicle’s lane, you’re somewhat more protected – but doing so is a violation of Maryland law.

Lane-splitting supporters also note that the practice is good for the environment because it speeds up traffic and allows motorcyclists to keep moving, spending less time on the road. In the United States, only the state of California allows lane splitting, while many countries in Europe and Asia also allow it.

However, there is no clear evidence that lane splitting truly improves motorcyclist safety. In fact, it’s just the opposite. Government traffic studies have shown that lane splitting is among the top right-of-way-violations (ROWV) that lead to multi-vehicle crashes.

One study found that 30% to 40% of all multi-vehicle motorcyclist crashes involved at least one ROWV. In the majority of these crashes, other motorists reported that they “looked but did not see” the motorcyclist due to a ROWV like lane splitting.

After a Motorcycle Accident, You Need Good Legal Advice

Traffic accidents between motorcycles and other vehicles can be quite complex. It’s often difficult to untangle exactly what happened and determine who was at fault, even when there is a police report for reference.

If you’re in a motorcycle accident that involves lane splitting, seek qualified legal assistance as soon as possible. It’s important to establish exactly who was at fault because Maryland is one of just four states that use the law of contributory negligence for accident claims. It means you’ll need to prove that you did nothing to contribute to the accident in order to recover compensation.

An experienced motorcycle accident lawyer can help you make your case in court and/or negotiate a settlement that covers your injuries, bike damage, and more. Contact the motorcycle accident attorneys at Zirkin & Schmerling Law to discuss your legal options.

Have a Legal Question About a Motorcycle Accident? We Have Answers

When you need to learn more about your rights, the attorneys at Zirkin and Schmerling Law can help. Contact us or call us at 410-753-4611 to set up an appointment with one of our experienced personal injury lawyers today.