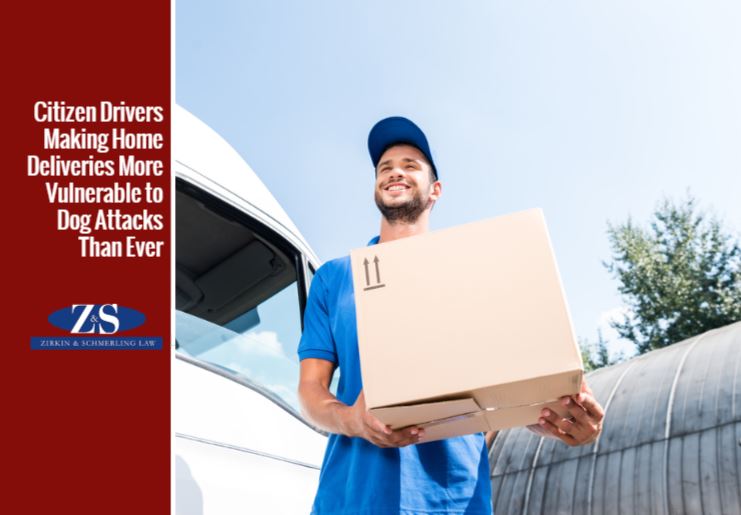 Around 5:30 pm on May 19, 2019, police are called to the 3600 block of Endsley Place, an unincorporated section of Upper Marlboro, Maryland. The problem? An American Bulldog has attacked a food delivery driver, biting off part of his ear. Local news agency WUSA9 reports the dog also bites the driver’s neck and face multiple times. When an animal control officer tries to capture the animal, it breaks free and lunges at the officer. A Prince George County police officer who senses another potential attack shoots and kills the dog, preventing further injury to the people in the area.

We are seeing an increase in the number of dog bites in our neighborhoods, like the attack in Upper Marlboro – making delivery drivers more vulnerable.

We know the meteoric rise of online shopping has drastically increased home deliveries in the United States. The U.S. Postal Service reports that postal workers were the victims of 6,755 dog attacks in 2016 alone. USPS is spending more than $25 million dollars each year on medical expenses and workers’ compensation costs related to dog bite incidents.

Unfortunately, we also know dog bite attacks in general are becoming all-too-common. The Center for Disease Control and Prevention reports more than 4.5 million people in the United States are bitten by dogs annually and 915 victims wind up in the emergency room per day – or a total of 334,000 people needing treatment for dog attack injuries. Dog bites can lead to infection, nerve damage, permanent scars and loss of functionality to the extremities, not to mention the emotional trauma related to an animal attack.

Have We Created a New Breed of Dog Bite Victim?

With traditional package delivery, like the U.S. Postal Service, UPS and FedEx, drivers typically have a personal interaction with the recipient less frequently than drivers who deliver food and other perishable goods like flowers. Packages are left in mailboxes or on the front porch, unless a signature is required for delivery.

The new breed of delivery driver brings food and other packages directly to the consumer, putting them more at risk of interacting with an owner’s pet. What’s more, if you are driving for a home improvement, appliance or furniture store, or a service like cable, internet or home security -you’re delivering goods and likely placing them inside a person’s home.

As protective as dogs can be of their owners and other family members like the kids, they can be equally dangerous for delivery drivers, whether traditional or not.

What Drives a Dog’s Aggressive Behavior?

If you are driving for a delivery service, stay alert to the actions of any dog you encounter, because it will give you a clue to what it is driving a dog’s potentially aggressive behavior:

What to Do in Case of a Dog Bite

If a dog bites or attacks you while making a delivery, the most important thing to do is seek medical attention. Make sure your wounds are thoroughly cleaned by a medical professional. You may need to get a rabies shot or a tetanus shot if your vaccinations are not current.

You also must act quickly to control the damage.

Have a Legal Question About Dog Bites in Baltimore? We Have Answers.

If you are a delivery person of any kind and are a victim of an animal attack or a dog bite, the attorneys at Zirkin & Schmerling Law are experts at answering all your questions and guiding you through challenging process of Maryland dog bite law. We can help you find out if you can hold a third party responsible for your injuries and file suit for damages. Contact us or call us at 410-356-4455 to set up an appointment with one of our dog bite attorneys today.