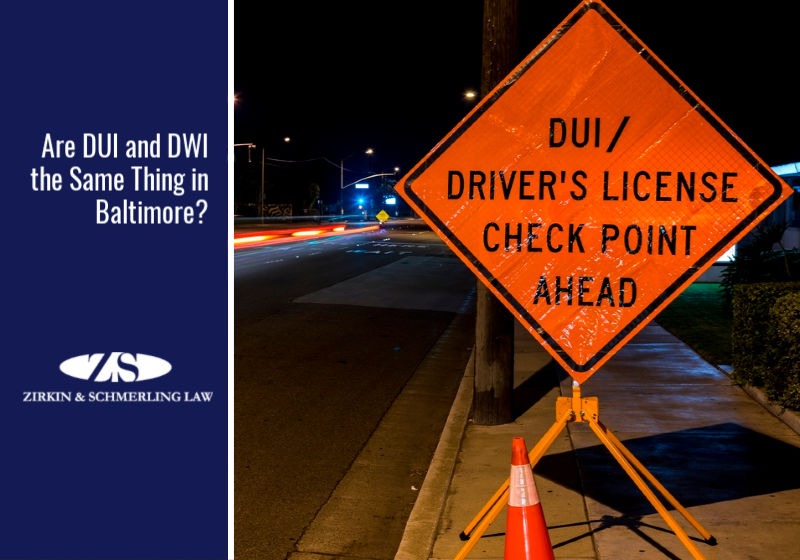 Maryland was once among the top states for DUI/DWI accidents. In response, our state enacted tough new laws, including harsher penalties and an ignition interlock program.

Today, Maryland is among the 10 states with the fewest alcohol-impaired driving deaths in the country. Still, there’s plenty of confusion about what it means to be charged with a DUI or DWI in Maryland. Is one more serious than the other? Does one come with worse consequences?

DUI and DWI are just convenient abbreviations used by the police and courts. In order to understand their differences, let’s break them down and examine what each letter means.

What Is The Difference Between DUI and DWI In Maryland?

The “D” in both terms stands for “driving.” Maryland applies a specific definition to driving, which is, “to drive, operate, move, or be in actual physical control of a vehicle, including the exercise of control over or the steering of a vehicle being towed by a motor vehicle.“

If you read this definition carefully, you’ll see that you can be convicted of a DUI/DWI without ever putting a vehicle into motion on the road. If you are in “actual physical control” of a vehicle, that’s all it takes to be driving a motor vehicle.

The other letters in DUI/DWI indicate what the officer believed was taking place at the scene.

DUI = Driving Under the Influence

Maryland has separate definitions for the terms “under the influence” and “while impaired.” Both of these crimes require that the person’s normal coordination is reduced because they consumed some type of substance.

To be “impaired,” a person’s normal coordination would have to be harmed only to some extent. Alcohol impairment in Maryland is assumed at a level of .07 BAC, while impairment from drugs can be more difficult to measure.

Myths About Maryland DUIs and DWIs

There’s also a myth that you can only be charged with a DUI or DWI if you’re using illegal drugs. In fact, you can be guilty of this crime if you use any type of drug, whether it is prescribed to you by a doctor, purchased over the counter, or illegally obtained.

The primary issue involved is your coordination and to what degree you were too impaired to drive. The goal of DUI/DWI laws is to keep dangerous drivers off the road.

Know Your Charges: The 5 Types Of DUI/DWI in Maryland

If you are arrested for a DUI or DWI, it’s important to understand the exact charges against you. Maryland recognizes five separate kinds of DUI and DWI charges:

The charge you will face is established in various ways, including DUI/DWI breathalyzer tests. The standard penalties differ depending on the severity of the charge.

As you can see, there is variation in the penalties you may face for these crimes. You could end up with anything from a $500 fine and 2 months in jail up to a $5,000 fine and 5 years in jail, or even more.

You could also face more severe penalties due to certain circumstances. If the DWI or DUI occurs when transporting a minor, you could receive an extended jail sentence – particularly if it is not your first offense. A commercial truck driver may lose their license, which in turn causes them to lose their livelihood.

In addition, the state of Maryland passed Noah’s Law in 2016 requiring the installation of vehicle ignition interlock devices for all offenders who:

DUI or DWI Charge? Here’s What to Do Next

After a DUI or DWI charge, your priority should be speaking to a criminal defense attorney. It is your right to refuse to make a statement to the police. Don’t say anything to other drivers, your friends, your family, or anyone on social media.

Your attorney will help you determine what’s in your best interest as you face your DUI or DWI charges. With the help of an experienced attorney, you can find the optimal outcome for your situation.

Have a Legal Question About DUI and DWI? We Have Answers

When you need to learn more about your rights, the attorneys at Zirkin and Schmerling Law can help. Contact us or call us at 410-753-4611 to set up an appointment with one of our experienced criminal defense lawyers today.